While never copying Jackson's style, Locke and the band capture his deep spirit in this swinging and bluesy set of eight tunes associated with the master. This is the rare "tribute" record that stands on its own merits, even as it honors a major figure in the history of jazz. 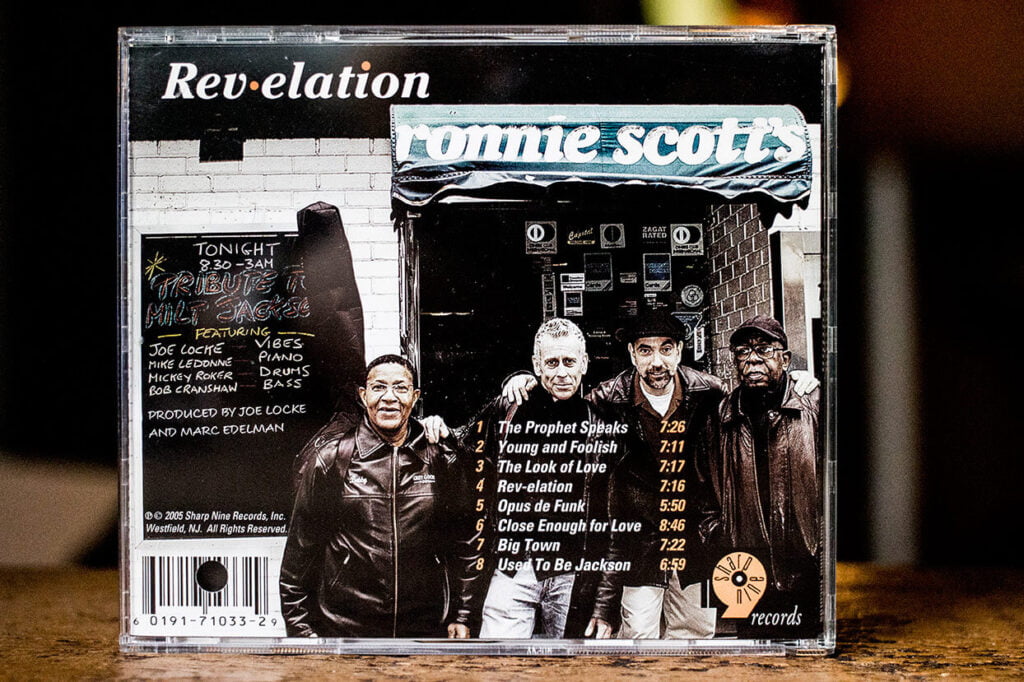 Revered by musicians and fans alike, Milt Jackson was one of the most soulful, yet modern, jazz artists of the second half of the 20th century. Joe Locke, a vibist whose technical proficiency is matched only by his versatility, meets Jackson’s last working rhythm section of Mike LeDonne, Bob Cranshaw and Mickey Roker in a celebration of “The Rev’s” music recorded live at Ronnie Scott’s jazz club in London.

Milt Jackson was an original. No matter how long this planet continues to circle the sun, his art will never be duplicated. In his book, Care of the Soul, the writer Thomas Moore states, “There is nothing more powerful than the revelation of one’s on soul.” Milt Jackson revealed his soul in every solo he played, every story he told. That’s what made him so special and so inimitable. The notes can be copied and will be, but no one will ever bring them to life as their author did.

It was with this awareness that I entered into this project. Mike LeDonne, the driving force behind The Milt Jackson Tribute Band, asked me to join him, Bob Cranshaw and Mickey Roker for a two night engagement at SMOKE, a great jazz club in New York City. The weekend was such a blast we decided to keep the party going by booking a week at Ronnie Scott’s, the venerable London jazz venue which over the years has hosted such great artists as Ben Webster, Stan Getz, Elvin Jones, Sonny Rollins and Bags himself. Once the idea of recording the group live was brought up, it simply wouldn’t go away. The notion of documenting a week with Milt Jackson’s own hand-picked rhythm section in one of the world’s most prestigious jazz clubs was irresistible. With the assistance of my manager, Tom Marcello, along with Marc Edelman of Sharp Nine Records and Pete King of Ronnie Scott’s, the idea became reality. We recorded two of six nights. The result is Rev.elation.

The songs for this recording were taken from Milt’s most recent repertoire, the tunes he enjoyed playing with Mike, Bob and Mickey during the decade they were together as a band. Rev.elation is Mike LeDonne’s dedication to his former boss, the title referring to one of Mr. Jackson’s nicknames – “The Reverend”. Big Town is my tribute to Mickey Roker, whose baptismal name is Granville, hence the title.
Playing the music of Milt Jackson with Mike, Bob and Mickey has been a highlight of my musical life. Their support and trust helped me be able to take on the challenge of playing this music. As I said, the notes can be copied, but no one will ever play them like Bags. I would never try. All I can do is use the lessons I learned from him to tell my own story.

I think that’s the way he would have wanted it.